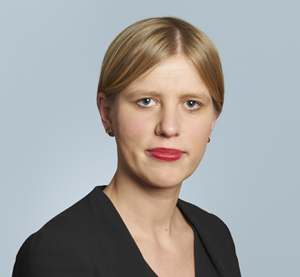 Agata works across the fields of asylum, immigration, public law and children’s rights. She has a particular specialism in refugee and trafficking claims as well as EU free movement law.

Agata appears in judicial review hearings  and appeals before the First-Tier Tribunal and Upper Tribunal (Immigration and Asylum Chamber), the High Court and the Court of Appeal in asylum and human rights, deportation, nationality deprivation and entry clearance cases as well as challenges to age assessments, detention under immigration powers and  cases concerning destitution and the provision of asylum support and bail accommodation. She is particularly well-placed to provide advice and representation on behalf of vulnerable clients including victims of trafficking for sexual exploitation, forced labour and forced criminality, victims of torture and unaccompanied asylum seeking children. She has considerable experience in urgent and out of hours work.

Agata is a fluent Polish speaker and regularly assists Polish-speaking clients. She accepts instructions on a Direct Public Access basis in all areas of her work.

Prior to coming to the Bar, Agata worked as volunteer caseworker for a number of charities in the immigration and asylum field, including Bail for Immigration Detainees (BID) and the New Citizens Legal Service. She continues to accept pro bono instructions on behalf of BID as well as other charities including the AIRE centre.

Agata has contributed case reviews to the Journal of Immigration, Asylum and Nationality Law and edits the immigration law chapter for Butterworths Family Law Service.

“My client was very nervous during her First – tier Tribunal appeal but Agata’s professionalism and her obvious knowledge put the client at ease straight away. Agata has an understanding of the clients’ needs and they found this experience highly satisfying. I have no hesitation in instructing Agata again.” - From an immigration solicitor.

“We want to thank you very much for the conference yesterday. It is with special thanks for your wonderful professional service and constructive advice given that indeed turned our meeting into a very productive one.” - From a direct access client.

Agata’s practice primarily focuses on asylum and refugee law. She provides representation and advice in respect of appeals in the Immigration and Asylum Chamber (First-tier and Upper Tribunals) in immigration judicial review claims and appeals to the Court of Appeal. She has extensive experience in refugee claims from Turkey, Afghanistan (especially claims by unaccompanied asylum seeking children), Sri Lanka, Albania, Iraq and Iran, including claims on the basis of sexual orientation and religious conversion. She regularly represents victims of trafficking in protection claims and appeals.

Agata has a particular interest and expertise in EU free movement law, including complex claims involving misuse of rights, breakdown of a marital relationship and claims by vulnerable EU nationals in detention. She is well-regarded for her ability to engage with clients whose cases involve difficult credibility challenges, especially in the context of sham marriage allegations.

Agata has considerable experience in emergency work, including out of hours applications for a stay on removal. She often acts in cases involving complex mental health issues. With a background in family law, she is well-placed to assist clients with cases spanning both immigration and family law issues.

Agata specialises in public and administrative law especially cases with an immigration or asylum element and community care. She has particular experience in representing unaccompanied asylum-seeking children in age dispute claims against local authorities and children and vulnerable adults in challenges against the Home Office to termination or failure to provide support. She regularly acts on behalf of victims of trafficking.

Agata has a considerable practice acting in cases challenging detention under immigration powers, both in the High Court and the County Court, and provision of bail accommodation and asylum support. She regularly appears in cases which necessitate urgent applications for mandatory interim orders for release or accommodation. She appeared as junior counsel (led by Laura Dubinsky) for one of the successful claimants in R (Humnyntskyi) v Secretary of State for the Home Department [2020] EWHC 1912 (Admin), a significant case concerning accommodation for immigrants under paragraph 9 Schedule 10 Immigration Act 2016 and destitution and Article 3 ECHR. The Home Office’s policy and practice concerning the provision of bail accommodation to destitute foreign national offenders were declared systemically unfair.

Agata accepts instructions in the area of business immigration, including all aspects of the Points Based System. She assists sponsors in respect of compliance issues and challenges to decisions to refuse or revoke sponsor licences. She acts for businesses in appeals against civil penalty notices for employing individuals with no right to work in the UK.

Agata has considerable experience in representing children and parents in cases at the intersection of immigration and family law. She is well-placed to assist clients in matters which require an assessment of a child’s best interests. She has acted in public law cases involving allegations of child neglect, parental alienation and radicalisation. She has a strong interest in proceedings concerning the risk of Female Genital Mutilation and forced marriage.


The Government Legal Department confirmed today that the ...Read more


The Court of Appeal in Terzaghi v SSHD restored the decis...Read more