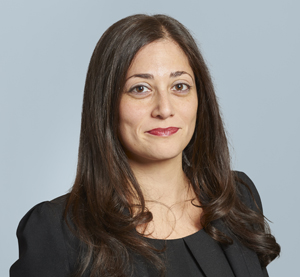 Annabel is a leading Junior with substantial expertise in serious and complex criminal trials and appeals including Murder, Terrorism, offences under the Modern Slavery Act, Firearms offences and Financial Crime.

She is frequently instructed in cases involving a substantial international element, having worked in recent years in France advising a multi – national company on its obligations under the UK Bribery Act, and in Ukraine providing advice and training (to the government of Ukraine, the Chief Military Prosecutor’s Office and the State Security Services) on cooperation with the International Criminal Court and domestic prosecutions for war crimes arising out of the Russian occupation of Crimea and the ongoing armed conflict in the East of Ukraine.

Recent and Significant cases include:

R v AD – Junior Counsel (led by Andrew Morris at ITN) defending in 6-week Terrorism trial heard at the Central Criminal Court. The case involved allegations of 15 Counts of Terrorism including funding and encouraging others to commit acts of terrorism. It attracted both national and international media attention (BBC, Jewish News, Sky News, The Independent).

R v Eric Tomlinson and Ors (The Shrewsbury 24) – Junior Counsel (Led by Piers Marquis) representing the actor Ricky Tomlinson (Best known for his role as Jim Royle in “The Royle Family” T.V comedy) in his successful appeal against conviction for picketing during the first ever national building workers’ strike in 1972.

The Court of Appeal quashed the convictions of the pickets known as, “The Shrewsbury 24”, finding that original witness statements had been destroyed and that their trial, over 47 years ago, was unfair. The appeal also involved declassified documents discovered in the national archives showing a covert Whitehall unit, the IRD (Information Research Department of the Foreign and Commonwealth Office, set up during the cold war to produce anti-communist material), played a significant part in the production of a television documentary, “Red Under the Bed” – a programme about alleged communist infiltration into the trade union movement -  that was broadcast in the course of the trial and featured the defendants. (Press coverage can be found here: The Guardian, BBC).

Jonathan Beere and Daniel Payne - Appeal of the Freshwater Five  - Junior counsel led by Joel Bennathan QC) – Fresh evidence appeal against conviction for conspiracy to import 250 kilograms of cocaine (worth £53 million) into the UK through “coopering” at sea in 2010.

The cocaine was allegedly transported from South America (Brazil) by a commercial container ship, the MSC Oriane, and collected in the English Channel by the crew of a fishing boat, the Galwad-Y-Mor. The appeal turned on fresh scientific (nautical data) evidence calling into question the proximity of the two vessels in the English Channel and whether it was in fact possible for the coopering to have occurred. (The appeal was the subject of a 6-part podcast by the Guardian. Other press coverage can be found here: BBC, BBC, BBC).

Operation Argon (Leading Danielle Barden, 5SH) - Lead counsel successfully representing young Bulgarian woman accused of facilitating sexual exploitation under the Modern Slavery Act. Ms S was accused of arranging for a teenager to be brought to her flat as bait to attract a drug dealer’s customers. The teenager was allegedly plied with drugs and raped by strangers. It was asserted by the Crown that the teenager was being groomed by Omar Sharif, a local drug dealer, who was convicted after trial and sentenced to 37 years imprisonment for multiple counts of rape as well as well as supplying Class A and perjury. (Press coverage can be found here: Daily Mail, BBC).

R v N and Ors (Led by Lauren Soertsz) - Led junior counsel representing man (H) charged with conspiracy to throw caustic acid on a three-year-old child. This case concerned a father hiring others to throw sulphuric acid on his three-year-old son at the Home Bargains Store in Worcester in July last year. H was the middleman organising the attack and liaising between the father and those defendants who physically carried it out by throwing the acid. The child suffered serious burns to his face and arm and the case garnered national media attention in light of its unusual and serious nature. (Press Coverage can be found here: BBC, BBC, The Guardian, Telegraph, ITV).

R v S and PM (Led by Katy Thorne QC) - Led junior counsel representing homeless man who, together with his girlfriend, was convicted of beating her lover to death inside his flat before setting fire to it in an attempt to cover up the murder. (Press coverage can be found here: BBC, ITV).

Based in Kiev, Ukraine, Annabel managed a team of international and Ukrainian lawyers providing international humanitarian law advice and training to the Government of Ukraine, the Ukrainian Military, State Security Services, the Prosecutor General’s Office and Ukrainian NGOs. The project included advising the Chief Military Prosecutor’s Office and the Prosecutor’s Office of Crimea on the investigation and prosecution of war crimes arising out of the ongoing armed conflict with Russia as well as providing advice to members of parliament regarding the use of sanctions and communications to the ICC.

Bribery and Corruption, Paris, 2015 - Advised a French multi–national company engaged in global power and transport projects on its obligations under the UK Bribery Act. Based in the offices of the client in Paris, I managed a team tasked with conducting quasi internal investigations and drafting reports on the adequacy of the company’s ethics and compliance procedures.

Missouri death penalty project, April 2015 – Assisted in the Co-ordination of a project based in Missouri, USA, involving strategic litigation and issues relating to the arbitrary nature of the US death penalty system.

R v Laszlo Gyramati, – Defended a man charged with the murder of a young Hungarian woman whose body was discovered in a suitcase (led by Joel Bennathan QC).

R v Ian McKensie, – Defended a man charged with causing grievous bodily harm with intent (Section 18) to his partner. The sole prosecution witness was the eight-year-old daughter of the defendant and victim. This case was part of the “Section 28” procedure pilot scheme at Kingston Crown Court. The scheme is currently being rolled out nationally as the standard advocacy approach to the handling of young and vulnerable witnesses.

R v Hassan – Defended a man accused of child cruelty. Case involved the cross examination of children between the ages of 9 and 14.

R v Hamilton, Inner London Crown Court - Possession with Intent to supply Class A and possession of Criminal Property, successful half time submission of no case to answer

R v Gough (ongoing) – Representing Stephen Gough, the “naked rambler” in a challenge to the legality of an ASBO imposed on him to prevent him from appearing nude in public (led by Stephen Powles). This case has now been referred to the ECtHR.

Bauer v DPP [2013] 1 W.L.R 3617 – Represented protestors on appeal to the High Court on point of law concerning the remit of joint enterprise, Articles 10 and 11 ECHR and the interpretation of the law of Aggravated trespass (led by Richard Thomas).

R v Bentall [2009] EWCA Crim 1730 – Represented prisoner in CCRC referral on a point of law concerning remand time and the setting of the minimum tariff in life sentences. Heard before the then Lord Chief Justice of England and Wales, Lord Judge (junior alone).

R v LCpl Shulz, Court Martial Centre, Bulford – Represented LCpl in the British Army who pleaded guilty to breaching standing military orders in Nairobi. Following a 2-day sentencing hearing the defendant was spared a prison sentence and permitted to retain his rank. The Co-defendant was sentenced to a term of imprisonment and discharged from the army.

R v Chan and Ors, “The Iceland Skipping Case” – Acted for all three defendants facing prosecution under the 1824 Vagrancy Act for taking food from an Iceland skip. The case was dropped by the CPS four days before trial following mass media coverage.

Instructed to represent requested persons under Part 1 and Part 2 of the UK Extradition Act:

Kinga Trybulska v Poland – Successfully represented the sole carer of a 5 year old child whose extradition was sought by Poland for breach of a suspended sentence. The requested person was discharged at first instance.

Experience representing bereaved families in inquest proceedings, particularly, but not exclusively, cases arising out of deaths in custody.

Significant experience in representing prisoners at parole board hearings.

Jurisdiction of the International Criminal Court: International standards and Best Practices of War Crimes Investigations – Provided to the Prosecutor’s Office of the Autonomous republic of Crimea, including investigators and prosecutors who are actively investigating war crimes committed during the ongoing occupation of Crimea

Amicus (Assisting Lawyers for Justice on Death Row) bi-annual death penalty training – Regularly deliver training on investigation in capital cases and in the process of jury selection in US capital murder trials.

Court of Appeal quash convictions of the Shrewsbury 24


Fourteen of the “flying pickets” known as the Shrewsbury ...Read more