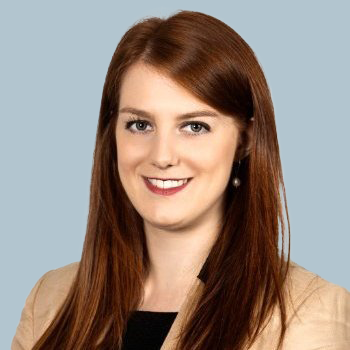 Caragh has a broad public law practice with an emphasis on Equality and Discrimination, Court of Protection and Inquests and Inquiries.

Caragh has a broad public law practice with an emphasis on Equality and Discrimination, Community Care and Court of Protection.

Prior to coming to the Bar Caragh practised as a solicitor (Scots law qualified) and was a Kennedy Scholar at Harvard Law School where she specialised in International Human Rights.

Caragh has assisted in respect of a number of public law matters including:

Caragh has an excellent understanding of the inner workings of government having supported Ministers in the passage of primary legislation and prepared international litigation at the World Trade Organization on behalf of the UK while working as a solicitor at the UK Government Department for International Trade.

Caragh has also taught public law and administrative law tutorials at the University of Glasgow and has particular expertise in constitutional issues relating to devolution.

Caragh has been involved in work relating to equality and discrimination throughout her legal career and she has a particular interest in the rights of women and children and individuals with disabilities.

She recently advised an NGO on the interplay between the ECHR and UNCRC in an intervention before the European Court of Human Rights concerning involuntary treatment of persons with disabilities (with Aswini Weereratne QC).

Caragh advises individuals and organisations on the Equality Act 2010. She is currently advising on a claim under the Act against a service provider (with Paras Gorasia), and has assisted in an inquiry concerning the compliance with the Act of the equality and access policies of a University.

Caragh previously worked as a solicitor at the Equality and Human Rights Commission where she led a project concerning the Commission’s strategic litigation and enforcement work in Scotland and developed a detailed understanding of the Equality Act 2010. Caragh has also worked on gender equality projects at the Clinton Global Initiative in New York and led a project at Capability Scotland on the impact on social welfare reform on disabled individuals.

Caragh’s LLM paper at Harvard analysed the Ashers Baking Company appeal and was supervised by US Supreme Court Justice Kavanaugh.

Caragh accepts instructions in Court of Protection proceedings. She regularly acts in section 21A applications and health and welfare proceedings, including urgent applications. Caragh has acted for litigation friends including the Official Solicitor. She also acts for local authorities and family members.

Caragh recently acted as junior counsel (led by Aswini Weereratne QC) for RESPOND in its intervention before the Supreme Court in a case which confirmed the test for capacity to engage in sexual relations under the Mental Capacity Act (A Local Authority v JB (by his Litigation Friend, the Official Solicitor) (AP).

Caragh was involved in drafting a resource on the Mental Capacity Act 2005 for an NGO supporting individuals with learning disabilities.

Caragh advises on the provision of support and accommodation under the Children Act 1989 and care and support under the Care Act 2014.


In an important ruling, the High Court has today overturn...Read more


The Supreme Court has today handed down judgment in A Loc...Read more