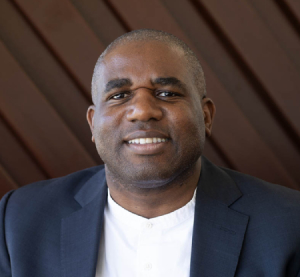 Born in Tottenham, north London, David was awarded a choral scholarship to The King’s School, a state boarding school in Peterborough. David graduated with a Bachelors of Law from the School of Oriental and African Studies, before becoming the first Black Briton to attend Harvard Law School, where he graduated with a Master of Law degree in 1997. He then practised as a barrister in England and as an attorney in the United States.

As an opposition backbencher, David gained reputation for being one of Parliament’s most successful campaigning MPs. Often involved in high profile cases affecting his constituents- Victoria Climbie, Baby P and Mark Duggan. In January 2016, the then Prime Minister, David Cameron, asked David to lead an independent review into the treatment of, and outcomes for, Black, Asian and Minority Ethnic individuals in the criminal justice system. The Lammy Review was published in September 2017, and many of its recommendations continue to guide government policy to this day.

David led the campaign to guarantee the right of Commonwealth nationals impacted by the Windrush scandal, prompting the government to establish the Windrush Lessons Learned Review and compensation scheme. He has also been at the forefront of the struggle for justice for families impacted by the Grenfell Tower fire, helping to secure an independent inquiry, as well as compensation scheme for victims. In 2018, David was awarded Politician of The Year by The Political Studies Association and GQ Magazine, as well as Campaigner of The Year by The Spectator magazine.

In April 2020, David was appointed Shadow Secretary of State for Justice and Shadow Lord Chancellor. Then in November 2021 David was promoted to Shadow Foreign Secretary.

David is the author of two books: ‘Out of the Ashes’ (2011), which examines the causes of the 2011 London riots, as well as ‘Tribes: How Our Need to Belong Can Make or Break Society’ (2020) which explores solutions to the tribalism that has gripped politics in the 21st century. David is a member of the Privy Council and a Fellow of the Royal Society of Arts. He holds an honorary doctorate from the University of East London, and is a fellow of the University of Birckbeck, St John’s College Durham and City Lit.


Doughty Street Chambers is delighted to announce that thi...Read more