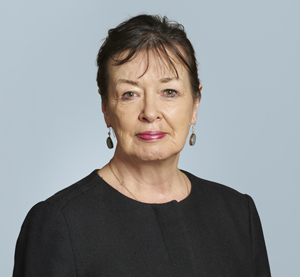 Jeannie is an experienced leading junior with an extensive practice both in serious crime and in complex and sensitive cases involving mentally disordered or disabled defendants.

She has extensive experience in 'fitness to plead' cases, and has contributed to psychiatric writing on that topic. She first qualified as a solicitor working in serious crime and family cases, with a further specialization in the mass defence of protest cases ( Lewisham and Southall 'riots') and then became a founder member of the first Solicitor Advocates Chambers in London where she concentrated on advocacy for several years, transferring to the Bar in 1995. As well as cases with a mental health element, her current practice covers financial crime and fraud, offences of serious violence, cruelty against children, sexual offences, regulatory work and advisory and appellate matters. Her background as a solicitor gives her a particularly good understanding of case preparation and its requirements - she is noted for her reassuring and easy manner with clients.

Recent and current cases with a mental health element include contesting an application for a hospital order under S37 Mental Health Act, requiring expert cross examination of psychiatrists on medical issues (R v F, Wood Green Crown Court); running a successful abuse of process argument for a seriously depressed woman accused of substantial theft from an employer ( R v U, Wolverhampton Crown Court); securing acquittal for a learning disabled defendant accused of raping a learning disabled complainant, where evidence was given via an intermediary (R v H, Southwark Crown Court)

She is an elected Council member at Liberty (NCCL) for whom she has also prepared consultation papers on criminal topics, including homicide reform; anonymity in rape cases; voice identification, and the PACE codes of practice. She is a regular contributor to the College of Law's training videos for solicitors, as an expert in sentencing guidelines and the new partial defences in murder. She writes regularly on legal topics for Solicitors Journal: her monthly column 'Behind Bars' can be accessed here October 2012,  November 2012, January, March, April, May, June and July. She is currently revising the criminal aspects of mental health law for Halsbury's Laws, as an assistant contributing editor. She is also co- authoring chapters on witness testimony and experts in a forthcoming OUP publication on sexual offences. Her first book was the Penguin Guide to the Law for Parents ( co authored with solicitor Lesley Taylor).