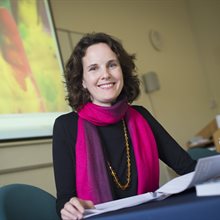 Aoife Nolan is an internationally recognised expert in human rights law, with a particular focus on economic and social rights and children's rights. Aoife Co-leads Doughty Street Chambers' Children's Rights Group. She is Professor of International Human Rights Law at the School of the Law, University of Nottingham, where she is also Director of the Human Rights Law Centre's Economic and Social Rights Unit. In November 2016, she was elected as a member of the Council of Europe's European Committee of Social Rights, the leading European monitoring mechanism on economic and social rights. In 2018, she was appointed to the Scottish First Minister's Human Rights Leadership Advisory Group, which was tasked with making recommendations on how Scotland can lead by example in human rights, including economic, social, cultural and environmental rights. She is currently a member of the Scottish Government's Child Rights Working Group, which was convened to inform the development of a model that incorporates the United Nations Convention on the Rights of the Child into domestic law in Scotland. Her books include Children’s Socio-economic Rights, Democracy and the Courts (Hart, 2011), which won the IALT Kevin Boyle Book Prize and was shortlisted for the Society of Legal Scholars Peter Birks Prize for Outstanding Legal Scholarship, Economic and Social Rights after the Global Financial Crisis (CUP, 2014), Human Rights and Public Finance (Hart, 2013) (edited with O’Connell and Harvey), and The United Nations Special Procedures System (Brill) (edited with Freedman and Murphy).

Aoife has worked with and acted as an expert advisor, consultant and trainer to a wide range of international and national bodies and organisations working on human rights law issues, including UN Special Procedures, UN treaty bodies, the Council of Europe, and multiple national human rights institutions. In 2017, she produced a report for the World Bank on ‘Fiscal Constraints and Human Rights: Is there a ‘right’ way to scale down social programmes?’, focused on question of under what circumstances, if any, and, if so, how social programmes can be scaled down in compliance with human rights standards. In 2019, she was commissioned by the Council of Europe to produce a report on ‘Protecting the Child from Child Poverty: The Role of Rights in the Council of Europe’.