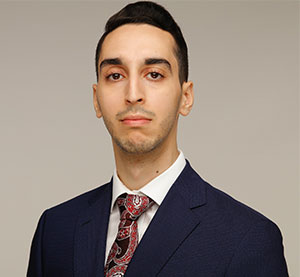 ‘He is supremely impressive’ LALY Awards 2022

Rabah specialises in serious crime and appeals, extradition, public law, and international law. He is knowledgeable and experienced in terrorism and national security cases.

Rabah regularly acts in cases involving allegations of murder, terrorism, organised crime, ‘gang’ membership, and cases arising out of protest action. He is sought in high profile criminal cases characterised by complicated legal issues, complex evidence, and cross-jurisdictional elements. He has extensive expertise in cases predicated on suggestions of group ‘membership’ or association.

Rabah advises on fresh appeals against conviction and sentence. He has advised on miscarriages of justice in murder cases and historic convictions. Rabah has appeared successfully both alone and led in the Court of Appeal, including in a recent case overturning a serious conviction on bias by the trial judge and lack of a fair trial. Rabah is expert in judicial review proceedings linked to criminal justice matters.

Rabah’s extradition practice encompasses cases at all levels, and foreign or international proceedings. Rabah has experience working on sensitive international law cases, including those involving sanctions, and serious human rights abuses such as extrajudicial killings and arbitrary detention.

Rabah was the Oxford Bonavero Institute Fellow, and then the Bertha Justice Fellow at the international human rights NGO, Reprieve. He worked extensively on terrorism and national security matters, including cross-jurisdictional cases involving the UK and US. Whilst at Reprieve, Rabah also assisted with the representation of Guantanamo Bay detainees. Rabah has delivered strategic litigation training abroad.

After Radovan Karadzic’s conviction for genocide, crimes against humanity, and war crimes, Rabah was a member of the Karadzic Appeal Team at the International Criminal Tribunal for the former Yugoslavia in The Hague.

Rabah is an experienced trial advocate. He has represented defendants in serious, lengthy, multi-handed, and legally complex trials.

Rabah has a significant practice in criminal appeals. He is regularly instructed to advise on appeals against conviction, and sentence. He is often granted leave by the Single Judge to argue grounds before the full court.

In his appearances before the Court of Appeal, Rabah has been praised for the excellence of his oral and written submissions, with the Court ‘paying tribute to the clarity and focus’ of his advocacy.

As a previous Judicial Assistant to Swift J (the Judge in charge of the Administrative Court), Rabah brings invaluable skill and insight to judicial review proceedings.

Rabah has a track record of successful public law challenges in the field of criminal justice. He is regularly instructed to challenge decisions made by the police, the Crown Prosecution Service, the Parole Board, and other public bodies.

Rabah has experience in the broad range of issues in extradition proceedings and appeals, including successful arguments related to suicide risk under Article 2, and prison conditions under Article 3. Rabah has defeated warrants on Article 8 arguments.

Rabah has represented clients in extradition cases involving a range of jurisdictions, including Spain, Italy, Romania, Lithuania, and the US; and relating to offences from million-pound corporate tax evasion and money laundering, to murder, manslaughter, and allegations of membership of proscribed terrorist organisations.

Rabah has experience seeking Rule 39 interim relief, and making applications under Article 34 to the European Court of Human Rights, including in a recent case, led by Ben Cooper QC and Mark Summers QC, concerning a US extradition request to the UK for a man wanted for a 1991 murder in California. Rabah also has experience in extradition proceedings in foreign courts, and international criminal courts.

Rabah has been led in high-profile, sensitive cases. He is familiar with the use of various international law mechanisms to progress a case, including applications before UN bodies and Special Rapporteurs, and proceedings in international, regional, and overseas/domestic courts.

Rabah is instructed in civil proceedings arising out of criminal investigations, principally financial crime matters. He has secured a number of successful outcomes in restraint proceedings, including in a recent £11.2m, multi-jurisdictional boiler room fraud, giving rise to a cross-jurisdictional, all assets restraint order.

Rabah is instructed in civil liberties work, including advising on claims for false imprisonment by the police and public authorities. He recently secured a settlement of £15,000 for an asylum seeker who was unlawfully detained by the Home Office.

Rabah is instructed in environmental and regulatory matters. He has appeared on both sides of Environmental Protection Act 1990 and Health and Safety at Work Act 1974 prosecutions. Rabah accepts instructions in professional discipline cases, and has presented cases for various regulatory bodies.

Oliver Lewis, Rabah Kherbane and Marie Paris are finalists in the LALY Awards 2022


Doughty Street Chambers is delighted to announce that thr...Read more