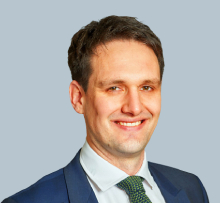 Sam specialises in public law, civil actions against public authorities, and inquests. He has been instructed as junior counsel in the Court of Appeal, the Supreme Court, the Privy Council and in a major Public Inquiry.

Sam has significant experience in both private and public law matters, primarily arising out of interactions of individuals with police, prisons, mental health care, and social care.  He is described in Chambers and Partners as a ‘rising star’ in the field of community care and praised for his ‘measured, logical approach’, ‘always clear’ written submissions, and ‘interesting work’.  He is regularly instructed in inquests, civil trials, and in High Court matters.  He has acted in a number of high profile cases including SG v SSWP concerning the lawfulness of the ‘benefit cap’, and Moseley v Haringey LBC on the law of consultation, both in the Supreme Court.

Sam is nominated in the Legal Aid Barrister of the Year category at the 2019 LAPG Legal Aid Lawyer Awards, which will be handed out at a ceremony on 10th July.

Sam is an expert in judicial review.  He regularly appears in the administrative court both as sole and junior counsel.  His recent and ongoing work includes:

Sam regularly acts in both child and adult social care matters.  He is described in Chambers and Partners as a “rising star” in the field of community care.

Sam has a particular interest in public law issues arising under the Children Act 1989 and often appears in the administrative court in cases concerning the assessment of and provision of services to children in need, the accommodation of children under section 20, and the provision of services to care leavers.  He has appeared in a number of cases relating to the provision of support to destitute families (such as R (F) v Barking and Dagenham LBC [2015] EWHC 2838 (Admin); R (BC) v Birmingham CC [2016] EWHC 3156 (Admin); and R (CO and KO) v LB of Lewisham [2017] EWHC 1676 (Admin).

Sam frequently acts for children in damages claims against local authorities, including claims arising out of delays by local authorities in issuing care proceedings, or failures to protect children at risk of harm.

Sam’s work in adult social care spans an array of issues under the Care Act 2014, including the assessment of and provision of services to meet need, and in relation to charging for care and support.  He was junior counsel in R (SG) v Haringey LBC [2017] EWCA Civ 322 (Court of Appeal) regarding the provision of accommodation under the Care Act.  He has acted in cases concerning individuals with autism and failures by local authorities to act consistently with the strategy made under the Autism Act 2009.  Sam was one of the presenters in Doughty Street’s seminar series concerning the Care Act 2014.

Sam has extensive inquest experience and has appeared as counsel in the Al-Sweady public inquiry and the Child Sex Abuse Inquiry.  His inquest work is varied but generally relates to deaths in prison custody, deaths following contact with police, or deaths following contact with mental health services.  He regularly advises on judicial reviews of coronial decisions and acted in R (Fullick) v HM Senior Coroner for Inner North London [2015] EWHC 3522 (Admin) which is often cited in relation to a coroner’s discretionary power to call a jury.  Sam acted for the family in relation to the decision to refuse anonymity to the police officers in the inquest concerning the shooting of Dean Joseph.

A significant part of Sam’s practice concerns police conduct.  He is regularly instructed to advise and act in claims concerning police assault, false imprisonment, powers of search and seizure, misfeasance, malicious prosecution and failures to investigate.  He acted for the Claimant in Marshall v Chief Constable of Nottinghamshire Police in which it was held by HHJ Owen that the police owed a duty of care in the conduct of ‘field tests’ for cocaine.  Sam is a contributor to the forthcoming edition of the LAG book on police misconduct.

Sam is frequently instructed in civil trials concerning actions against the police, such as:

Sam also acts in related judicial reviews (such as R (D) v DPP [2017] EWHC 1768 (Admin) regarding the prosecution of an historic sex offence) and in inquests touching upon the deaths of persons following contact with the police.

Sam has expertise in the area of equality and discrimination law.  He was junior Counsel in the Court of Appeal and the Supreme Court in R(JS) v SSWP [2015] UKSC 16 concerning the alleged discriminatory and unlawful effect upon women of the Coalition Government's so-called 'benefit cap'.  His civil claims against the police and public authorities frequently include claims made under the Equality Act 2010.

Sam has experience of Freedom of Information Act work in the Information Tribunal, of issues arising under the Data Protection Act 1998, and of claims in breach of confidence.


Today the Court of Appeal has allowed an appeal in an imp...Read more


A coroner has found that authorities who dealt with a ben...Read more

Accommodation: duties and powers under the Care Act 2014