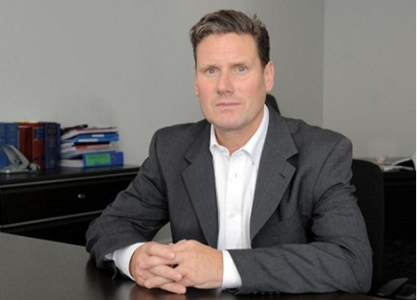 After studying law at Leeds University (LLB) and Oxford University (BCL), Keir Starmer was called to the Bar in 1987 and appointed Queen's Counsel in 2002. He has conducted cases at the highest level in England and Wales, including over 30 cases in the House of Lords (before it became the Supreme Court) and before the Privy Council. He has also conducted cases all over the world, including in international courts such as the International Court of Justice, the European Court of Human Rights, the Inter-American Court of Human Right, the Caribbean Court of Justice and the African Commission on Human and People’s Rights.

He was named as QC of the Year in the field of human rights and public law in 2007 by the Chambers & Partners Directory and in 2005 he won the Bar Council's Sydney Elland Goldsmith award for his outstanding contribution to pro bono work in challenging the death penalty throughout the Caribbean and Africa.

Keir has also written several leading textbooks, including the Three Pillars of Liberty: Political Rights and Freedoms in the UK (1996), European Human Rights Law (1999), Criminal Justice, Police Powers and Human Rights (2001) and the Human Rights Manual and Sourcebook for Africa (2005).

He was Director of Public Prosecutions and Head of the Crown Prosecution Service from 2008-2013.

As DPP, Keir was responsible for all criminal prosecutions in England and Wales. Among the complex and sensitive cases arising during his term of office were the cases about assisted suicide leading to the DPP's guidelines on Assisted Suicide which were issued in February 2010; the various cases in which members of the House of Commons and the House of Lords were charged with criminal offences; the successful retrial in the Stephen Lawrence case; and several so-called street grooming cases.

When the CPS and the Revenue and Customs Prosecution Office merged in 2010, Keir was appointed as the Director of Revenue and Customs Prosecutions, a post he held until October 2013. Within the combined prosecution service, the Fraud Division (fiscal and non-fiscal), the Organised Crime Division and the Counter-Terrorism Division reported to Keir. He is also a member of the International Association of Prosecutors.

Keir is an Honorary Fellow at St. Edmund Hall, Oxford University and holds honorary doctorate degrees from Leeds University, Essex University, the University of East London and the London School of Economics.