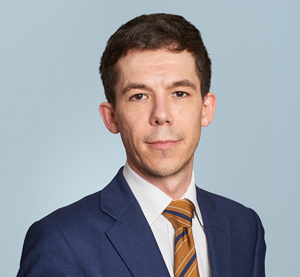 Tom is a specialist criminal defence barrister with extensive experience of both Crown Court and appellate advocacy. Tom also has an expanding practice within the field of professional discipline and regulatory law, regularly appearing before a wide range of healthcare tribunals including the GDC, NMC and HCPC.

Within the field of criminal defence Tom is frequently entrusted to handle complex and serious cases covering a wide range of offences from high value frauds and those involving extreme violence to multi-handed drug trafficking cases and sexual offences, both recent and historic. Examples of some of Tom’s recent instructions include:

Please see below for further examples of other serious cases in which Tom has appeared.

Within the field of professional discipline and regulatory law Tom has developed considerable experience advising and representing a wide range of medical and healthcare practitioners including nurses, midwives, speech and language therapists, physiotherapists and biomedical scientists before their respective disciplinary tribunals. He appears frequently before the fitness to practice committees of the NMC and HCPC in particular. Expanding on this work, Tom is now also regularly instructed to appear in cases before the GDC and advices on a wide range of issues from appeal to Rule 10 applications.

Given his expertise in criminal defence cases (where he has represented a number of professionals charged with criminal offences from teachers and doctors to healthcare workers), Tom is particularly well placed to deal with professional discipline matters involving quasi-criminal allegations and has represented Registrants, as well as appearing on behalf healthcare regulators, in conviction cases and those involving serious dishonesty charges.

Before joining Doughty Street Tom advised in several cases brought by the GMC, GDC, RPhS [as it was then] and the GSCS. In addition, he worked on the Mid-Staffordshire NHS Trust Public Inquiry chaired by Robert Francis QC and acted as temporary junior counsel in the case of Dr Al-Zayatt (the Consultant Paediatrician in the “Baby P” case) before the GMC.

Tom is also heavily involved in training in relation to healthcare regulation; most recently he has advised on the procedures involved in Interim Order Hearings before the NMC and he was invited to speak on the application of the public interest test within the context of Investigation Committee decisions within the GDC.

For examples of some of Tom’s recent instructions within the field of professional discipline, please see those listed in the ’Professional Discipline and Regulation’ section below.

Tom is a contributory author in the soon to be published ‘The Drug Offences Handbook’ [published by ‘Bloomsbury’], where he has written chapters on offences involving possession, supply and the importation of controlled drugs. Tom is also a contributory author in the second edition of LAG's 'Professional discipline and healthcare regulators - a legal handbook', where he has written a chapter on the practice and procedures involved in fitness to practice hearings before the General Pharmaceutical Council.

Before commencing pupillage, Tom worked as researcher for the Ministry of Justice, producing a report on international comparators for the Speaker's Conference on Parliamentary Representation. The conference considered the disparity between the representation of women, ethnic minorities and disabled people in the House of Commons and their representation in the UK population at large. He subsequently worked as a legal advisor for OFSTED, the Government body that regulates children's services and schools, dealing with complaints and investigations.

After university and prior to his legal training, Tom established and ran a small media production company, which specialised in making educational documentaries and training films on meeting special educational needs.

Tom is regularly instructed to appear on behalf of Registrants before Interim Order Committees, Professional Conduct and Health Committees as well as acting as a case presenter on behalf of the GDC. Some of Tom’s most recent instructions include:

Tom regularly advises on fresh appeals against both conviction and sentence. Most recently he has adviced on appeals against convictions for offences including rape, armed robbery and cannabis cultivation as well as advising on the sentencing provisions under LASPO.

Some of the cases where Tom has appeared before the Court of Appeal include:

Tom has significant experience in conducting cases arising from protest at the Magistrates’ Court and Crown Court. Some of the cases Tom has been involved in include:

The Howard League for Penal Reform