A Great Night Out: Celebrating the Equal Age of Consent (Online Webinar via Zoom) 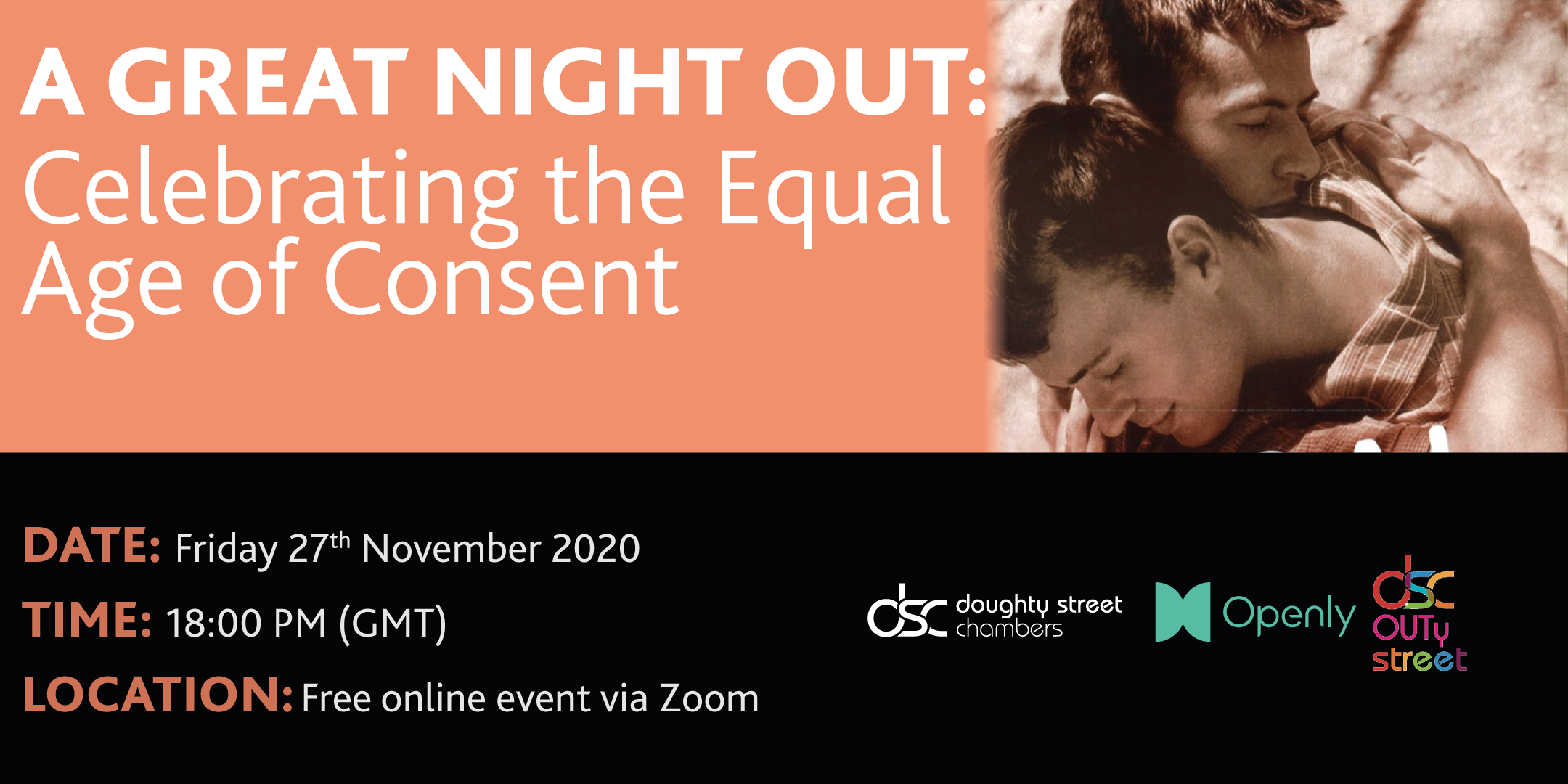 A GREAT NIGHT OUT: CELEBRATING THE EQUAL AGE OF CONSENT

Twenty years ago, the LGBT+ world was transformed. In the eyes of the law, gay male teenagers became the equals of their straight contemporaries. On 30th November 2000, the age of consent was fixed at 16 years, regardless of sexual orientation and gender identity.

From that moment, the prospect of LGBT+ equality became a reality. Millenia of persecution were swept away. It was a revolution.

We now take it for granted that the law will not discriminate against LGBT+ people, but before 30 November 2000, discrimination was entrenched within the UK system of Government and legal system.

To maintain that persecutory framework, lesbians had to be erased and gays demonised. British state policy was to criminalise sexual intimacy between men. Sex between women was denied. Eventually and reluctantly, Parliament accepted that to criminalise all sex between men was too harsh. They carved out exceptions, but gay sexual desire remained policed. Lesbian sexuality stayed crushed. A new tactic was devised to police the gays. Sex could only be lawful if it took place in private between two males and both parties were over 21 years. Later, the age limit was set at 18 years.

This policy was successful in achieving its objectives and the cruelty spoke for itself. It was state policy for parents to reject their queer children.

Shifting this status quo seemed hopeless. New anti-gay laws were adopted. At the close of the 20th century, LGBT+ people could be singled out for harsh treatment. There were criminal offences that only consenting gay men could commit. No laws protected LGBT+ people.

How did things change? Stonewall was established. Stonewall insisted that the voices of gay men and lesbians be heard. Remarkable people stepped up. Edwina Currie, a Conservative MP, showed the folly of gay hate and its impact on young people. Ian McKellen asked why he, and people like him, were denied equality.

Leaders emerged. Angela Mason, David Isaac, Michael Cashman demanded they be listened to. Peter Tatchell perfected the power of protest. He learnt from others and inspired countless more. People began to take cases and claimed their rights. Some would win.

In 1997, Labour was elected on a platform that no unjustified discrimination would be permitted in New Labour’s Britain. This was a clear commitment to gay and lesbian equality. At last power was there to protect LGBT+ people and not harm us. In opposition, Labour’s then Shadow Home Secretary, Tony Blair had no hesitation in putting his weight behind an equal age of consent.

Despite the Labour Government’s clear commitment to end discrimination, the establishment refused to give up on their hostility towards LGBT+ people. Backed up by a case before the then European Commission of Human Rights, Blair’s Government insisted on an equal age of consent. The forces of reaction knew that to concede parity between gay and straight teenagers would mean that their edifice of gay enmity would crumble. In the House of Lords, they dug in. They consistently voted against an equal age of consent.

Without grandstanding or fanfare, the Blair Government used the UK constitutional framework to outflank the Lords. The Parliament Act was brought into play and the legislation establishing an equal age of consent entered into force. It was only the 6th time a Bill had become an Act of Parliament using this procedure. The significance of using the Parliament Act to create an equal age of consent cannot be over-estimated.

To celebrate that brilliant and extraordinary moment in the evolution of equality in the UK, OUTy Street, Doughty Street Chambers LGBT network, along with Openly, the Thomson Reuters Foundation’s LGBT+ news site, are bringing together the key players who put in motion the LGBT+ equality that we all enjoy today. Speakers include:

There will be a video message from Tony Blair.

We will also be joined by some of the brave, young Petitioners who took cases to the European Court of Human Rights: Hugo Greenhalgh, Will Parry and Euan Sutherland. They will share their stories.

The evening is chaired by Helena Kennedy, Barrister, Author & Member of the House of Lords

This unique event on Friday, 27th November from 6pm will be a Great Night Out, albeit that we will be Zooming in from our homes under lockdown.

Please celebrate with us as we mark the moment LGBT+ people went from being barely tolerated to being recognised as imbued with human dignity.

A Great Night Out: Celebrating the Equal Age of Consent (Online Webinar via Zoom)