“The finest advocate in the English-speaking world,” was Lord Devlin’s description of Sir Sydney Kentridge QC.

In the cover article of this month’s Counsel Magazine, David Rhodes profiles Thomas Grant QC and his new book The Mandela Brief: Sydney Kentridge and the Trials of Apartheid (John Murray 2022).

David explains, “this is a book about what it is like to be an advocate when the pressure is really on: to defend political opponents of an evil regime when every cherished maxim of human rights is under attack, when the rules of the game are stacked against you, and the lives of your clients are at stake.”

Sydney Kentridge is the only advocate to have acted for three winners of the Nobel Peace Prize – Chief Albert Luthuli, Nelson Mandela and Desmond Tutu. He secured the acquittal of Mandela on charges of treason where his conviction would have resulted in the death penalty. Mandela later spoke of “the brilliance and courage of Sydney Kentridge which I witnessed day after day… His manner was always understated, controlled and relentlessly rational. His cross-examination was devastating.”

David has long pursued an academic interest in the criminal justice system in apartheid South Africa and the career of Sydney Kentridge in particular. He provided research assistance to Thomas Grant QC in the writing of the book over the last two years.

The Mandela Brief: Sydney Kentridge and the Trials of Apartheid by Thomas Grant QC is published by John Murray 2022. 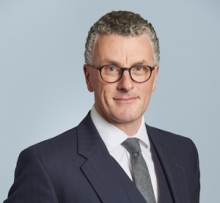