Kate is a defence specialist. Her practice encompasses criminal law, extradition and public law in the field of criminal justice. She is a versatile practitioner, being one of the few juniors in the country who specialises in terrorism work and who is dual-ranked in Chambers & Partners in the categories of Crime and Extradition.

Within crime and related civil work, she has particular expertise in terrorism, national security and the rights of children. In extradition, she has particular experience in cases which involve issues of jurisdiction and a cross-over with international criminal law. Kate has a strong appellate and judicial review practice and regularly appears alone and led in the Court of Appeal and Administrative Court. She is acting for several defendants in relation to murder appeals relating to the decision of the Supreme Court in Jogee [2016] UKSC 8.

Kate’s practice often has an international dimension and she has advised in criminal, extradition and death penalty cases in Botswana, Kyrgyrzstan, Gibraltar, Bulgaria, Trinidad and Tobago, Bermuda and the Bahamas.

Kate is a member of the Foreign Office Panel of Pro Bono lawyers for British citizens detained abroad, and she has trained lawyers in the applicability of international human rights law to counter-terrorism legislation on behalf of the United Nations. She is a contributing author to Mason’s Forensic Medicine for Lawyers (Bloomsbury Professional) on the issue of deaths in custody.

Kate has acted in a number of cases of legal significance including:

Kate represents requested persons at first instance and in appellate cases before the High Court under Part 1 and Part 2 of the Extradition Act 2003. Recent instructions include the American extradition request of ‘hacker’ Nathan Wyatt, who was previously arrested in the UK in relation to hacking the iCloud account of Pippa Middleton (for coverage see here.)

Kate has acted in a number of significant cases at first instance and in the High Court, including Brown & others v Government of Rwanda [2017] EWHC 1912 (Admin) where she represented one of five men whose extradition was sought by the Government of Rwanda in relation to the 1994 genocide and Italy v Hamasalih and Others, an Italian terrorism case which concerned s.12A of the Extradition Act 2003 and whether the approach of the Irish Supreme Court should be adopted by UK courts.

Kate has acted in a number of cases which engage Article 3 including Czech Republic v FK in which she represented a pregnant requested person who would enter life threatening heroin withdrawal if extradited and District Court Bratislava III v Richard Katrencik [2014] EWHC 2062 (Admin), where Kate challenged the compatibility of mandatory sentencing for drugs offences in Slovakia with Article 3 ECHR.

Kate is often instructed in cases which involve statutory interpretation or novel points of law. She acted alone in the first successful extradition costs challenge in the High Court: Skraba v Poland [2014] EWHC 2193 (Admin) and [2014] EWHC 2023 (Admin), in which it was argued that the Administrative Court had jurisdiction to review costs orders as part of a statutory appeal. Kate acted as a led junior in the case of Celinski and Others [2015] EWHC 1274 (Admin) which is now the leading case on the High Court’s appellate jurisdiction in extradition appeals involving Article 8 ECHR, in which the Lord Chief Justice determined whether extradition appeals could only be interfered with on ‘Wednesbury’ grounds.

Other cases of note include:

Kate's recent instructions include matters of gross negligence manslaughter, serious violence and firearms. Kate has developed particular experience in terrorism cases in both a criminal and extradition context. She has acted in high profile and complex trials as well as being instructed in an advisory capacity, and has worked with the UN in delivering training on human rights in the area of counter-terrorism measures. She has particular expertise in the applicability of international human rights law to terrorism legislation. Kate also acts in criminal cases before the Privy Council, and is currently acting for an Amicus Curiae in a death penalty case before the African Commission. Recent cases include:

Kate is regularly instructed to represent bereaved families in inquests. Kate has conducted Article 2 and jury inquests and is the author of 'Deaths in State Settings' for the 6th edition of Mason's Forensic Medicine for Lawyers (Bloomsbury Professional, published in February 2015). Recent and ongoing cases include:

Kate is sought after in cross-disciplinary work, including civil aspects of UK terrorism legislation and orders under the Terrorism Prevention and Investigation Measures Act: Secretary of State for Home Department v. LF) [2017] EWHC 2685 (Admin).

Kate was part of the legal team acting for Just for Kids Law in strategic litigation regarding the use of overnight police detention for 17 year olds (‘Still a Child at 17’). Following months of pre-action correspondence and a nationwide campaign in which the Claimant challenged the compatibility of s.38 of the Police and Criminal Evidence Act 1984 with Article 8 ECHR and the United Nations Convention on the Rights of the Child, the UK Government agreed to amend the provisions of PACE to afford 17 year olds the same protections as 16 year olds in overnight police detention: (Read More).


A Divisional Court, presided over by the Lord Chief Justi...Read more


Following what has been described as the biggest miscarri...Read more


The appeal of Jack Shepherd against conviction for a Bail...Read more 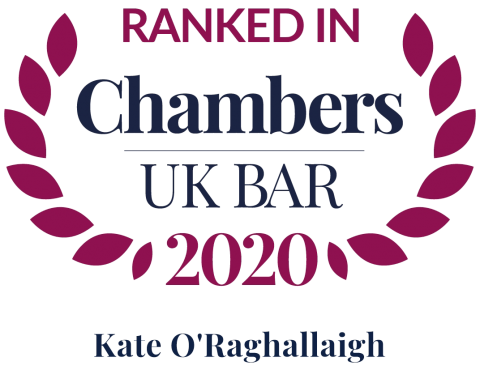