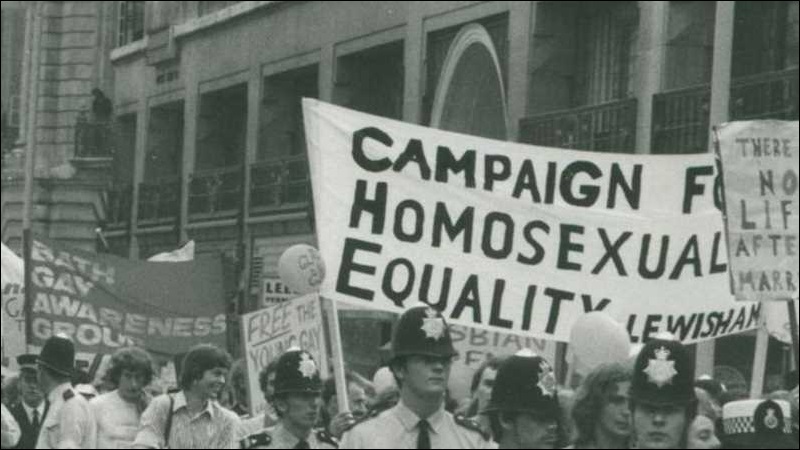 Before the AIDS crisis, before the infamous Section 28 outlawed the promotion of homosexuality, barely a decade after being gay had ceased to be a crime, the statute book was still littered with offences that would criminalise consenting sexual intimacy between men, as well as gay identity. Thousands would continue to be convicted. The lucky ones were spared entrapment by the police.

Being gay or lesbian was taboo. Homophobia was the status quo. Homosexuals were tolerated at best. Institutional hostility to gays and lesbians was rampant. But the law was used against gay people in specific ways. No laws protected the LGBT community. From schools to the health service, the criminal justice system to the armed forces, being LGBT was grounds for discrimination. There was a climate of impunity. A blind eye was turned to gay bashing. The dismissal of LGBT employees was standard practice. For parents to reject their LGBT children was the norm. Lesbian mothers were a risk. Gay fathers were inconceivable.

The 1970s and early 1980s were an extraordinary time to be Queer. The hate was self-evident, but this was also the dawning of the age of gay liberation. Despite the persecution, these could be thrilling times.

We present a unique evening where those who were there will tell it as it was.

Doughty Street’s Helena Kennedy will explain what it was like defending men being prosecuted for consensual sex with other men. Their only blessing was Helena. She at least would guarantee their dignity as the state sought to humiliate them. The personal toll on her of witnessing the way the law was stacked against these men is clear.

It was a hard battle, but Doughty Street’s Geoffrey Robertson shredded the state’s archaic censorship laws as they applied to LGBT people. He fought the law and he won. Geoff was the nemesis of Mary Whitehouse. Thanks to him, her histrionic moral outrage was (eventually) trumped by the cool rationality of law. Geoff helped dismantle the tools of policing that kept LGBT people living in fear. His description of the three seminal Queer cases of the ‘70s and ‘80s that he was involved in, the Gay News poem, Romans in Britain at the National Theatre and the Gays the Word bookshop raid will be a masterclass on holding the state to account. It will be packed with humour. When is a thumb not a thumb, but a penis? Geoff will reveal all.

Peter Tatchell will describe the times as a gay man fighting for justice. A prominent activist in the Gay Liberation Front from 1971, Peter will explain the extent of LGBT persecution and its consequences. He will also regale us with his tales of the city and how, by having the courage to celebrate ourselves and by others celebrating us, the LGBT community out manoeuvred our persecutors.

The evening will be chaired by the poet Roz Kaveney. Roz is a brilliant intellectual. She helped pioneer and transform trans activism throughout the ‘70s and ‘80s.

There will be a reading of the infamous Gay News poem that led to Denis Lemon’s conviction. Denis is the martyr of our story, but his torment led the way to later victories. There will also be video footage from the time and all sorts of entertainment. We will give the event a ‘70s Queer theme.

We hope that you can join us for this extraordinary event when we reflect on how things were barely a generation ago. We will celebrate the Queer victims of state oppression and we will toast those that were there for the LGBT community, when most chose to shun us.

The event will start at 6pm on Friday the 21st of February If you're interested in attending, please email events@doughtystreet.co.uk

Drinks from 5.30pm - Event starts at 6pm - Followed by drinks - Finishes when it ends