In an unusual but interesting case before the Chief Magistrate, Senior District Judge Arbuthnot sitting at Westminster Magistrates’ Court, Peter Carter QC was instructed on behalf of a private prosecutor, MS. MS is a Sri Lankan citizen who, with others, was subjected to a threat (a “cut-throat” gesture) from the then Defence Attaché to the Sri Lankan High Commission, a Brigadier Fernando.  Protestors had gathered outside the High Commission on Sri Lankan National Day, and during their protest Brigadier Fernando was said to have drawn his fingers across his throat on three occasions whilst looking towards the protestors, causing them significant fear.

Brigadier Fernando claimed diplomatic immunity, which it was agreed he benefited from whilst in post. However, since returning to Sri Lanka after leaving his post he further claimed residual immunity under the Vienna Convention in Diplomatic Relations, but Peter successfully argued that his “cut-throat” gesture could not be said to have been an act carried out in the exercise of the Brigadier’s functions in his diplomatic mission, and as such he could not claim immunity from prosecution. The Chief Magistrate agreed; her decision can be read by clicking here. 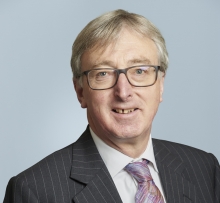