Represented by Rabah Kherbane leading Chloe Carvell (15NBS), H was acquitted after a 3-month trial. Rabah represented the music artist and fashionista charged with perverting the course of justice in a murder investigation. The prosecution alleged H had assisted in the disposal and destruction of a vehicle used in a double shooting in Northwest London.

The Crown’s case asserted a carefully planned and sophisticated double shooting, targeting specific rival gang members as revenge for a previous violent attack on a high-profile music artist. One of the shootings at point-blank range to the victim’s face causing his death was caught on CCTV from a nearby store.

Rabah instructed gangs and music (hip-hop/rap) experts, and a private investigator to build the Defence case. Rabah built a case discrediting the prosecution assertion of gang membership, and guided his client through five-days of giving evidence from the witness box in an Old Bailey courtroom. Rabah also challenged alleged ‘gang’ materials during legal argument.

After a 3-month trial, H was unanimously acquitted. The other three defendants on the indictment were represented by Queen’s Counsel (QCs).

Rabah was instructed by Callum Haddow at Saunders Solicitors. 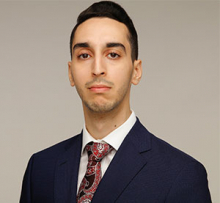