Represented by Rabah Kherbane, SM, a 29-year-old who grew up in a local North London Council Estate was found Not Guilty of offences of possession of a prohibited firearm and ammunition after a one-week trial.

The prosecution case was based on DNA evidence on a bag, sock, and muzzle of the firearm, and the presence of SM in the local area where the bag containing the firearm in the sock was found. SM was out for birthday celebrations with close friends near his home.

Rabah questioned two forensic experts at length to expose the limitations of DNA evidence in attributing direct, ‘timestamped’ contact to a named person, offering an easy to follow primer on forensic DNA profiles. This included rigorous analysis on areas of match calculation, secondary and tertiary transfer, mixed results and majority contributors, selection of areas of swabbing, coincidental occurrence of profile components, impact of contamination, and subjective interpretation of results.

On the basis of SM’s evidence, Rabah further drew together the realities of life on a Council Estate in North London, and disinvited any suggestion of guilt by association implicit in the prosecution case.

The jury returned unanimous verdicts of Not Guilty in under 3 hours of deliberation. 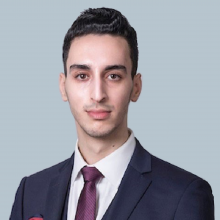