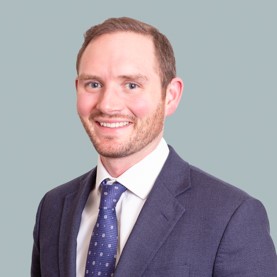 Chambers and Partners recognises Graeme as “a tenacious performer who knows the law well", and as someone who is “very conscientious and has a deep pool of knowledge”. Legal 500 describes Graeme as “a hardworking and diligent junior increasingly instructed on weighty extradition matters”, and as someone who is “very intelligent, thorough and leaves no stone unturned.”

Graeme is also a founder member of the Centre for the Enforcement of Human Rights International (CEHRI), which conducts public interest litigation with a focus on war crimes atrocities in Syria. Graeme previously worked extensively on death row in Uganda and continues to litigate death penalty cases. Graeme is regularly instructed in cases before the Privy Council, and ongoing cases include Mr Lescene Edwards’s murder conviction appeal from Jamaica; and, Mr Eden Charles’s challenge to the decision of the Prime Minister of Trinidad and Tobago to revoke his position as a UN ambassador. Graeme is otherwise instructed in litigation before the full range of international bodies, including the European Court of Human Rights, the UN Human Rights’ Committee, the UN Working Group on Arbitrary Detention, and the UN Special Rapporteur on Torture.

Graeme is recognised as the go-to defence extradition junior.

Graeme recently successfully represented Corey de Rose whose extradition was sought by the USA for an alleged cryptocurrency fraud worth $8.5 million. The Court found that a combination of Mr de Rose’s mental health condition and suicide risk meant that extradition would be both oppressive and a disproportionate interference with his right to a private and family life; and, further concluded that Mr de Rose could be prosecuted for the offences in the UK (Judgment).

Graeme also successfully represents Gabriel Popoviciu whose extradition is sought by Romania for involvement in an alleged multimillion-euro land transaction fraud. The High Court concluded that Mr Popoviciu had not been tried before an independent and impartial tribunal and had thereby suffered a “complete denial” of his fair trial rights. This is the first time that the High Court has discharged an EU extradition request on the basis that extradition represented a real risk of a “flagrant denial” of a person’s Convention rights (Judgment).

Graeme represents Mr Banmeet Singh, whose extradition to the USA has been stayed by the European Court of Human Rights pending consideration of whether the sentence of “life without parole” offers no prosect of release, and is therefore an inhuman sentence within the meaning of Article 3 ECHR. This follows Graeme’s successful representation of Ms Arti Dhir, whose extradition to India was sought for an allegation of child murder. The Court discharged Ms Dhir from the request as it concluded that, if convicted, she faced an irreducible life sentence, which sentence would be inhuman (Judgments here and here).

Graeme also successfully represented Gursharan Singh who, along with two others, was sought by India to face prosecution for the murder of a politician in the Punjab. The Court accepted that the evidence provided by the Indian authorities was insufficient to make out a case to answer. This follows on from Graeme’s successful representation of Mr Hasem Bazlah, wanted by France in relation to allegations of a people smuggling conspiracy, where the High Court concluded that the extradition request provided such an inadequate description of the offending that he had to be discharged (Judgment).

Furthermore, Graeme has had considerable success defeating extradition requests by arguing that extradition would breach his clients’ rights to a private and family life, as protected by Article 8 ECHR. Recent examples include:

Other important successes include the representation of:

In addition, Graeme proactively works with his instructing solicitors to compromise extradition requests without having to go to Court. Graeme has in turn built up a significant pool of contacts across the globe including lawyers, prison experts, and political experts. To safeguard a person’s reputation while progressing their case, Graeme understands the benefit of, and routinely works with, distinguished private investigators, reputation management professionals, and private security firms.

Graeme has a high-profile international practice.

Graeme represents Mr Mehul Choksi, an internationally successful businessman in the jewellery trade. Mr Choksi is accused of being a part of a conspiracy to defraud an Indian national bank of more than $1billion. This complex case involves significant litigation in Mr Choksi’s home country of Antigua and Barbuda, including: challenges to an extradition request issued by India; a constitutional challenge to the decision of the Antiguan Prime Minister to revoke Mr Choksi’s citizenship; and, a constitutional challenge to the Antiguan government’s failure effectively to investigate Mr Choksi’s abduction and forceful removal from Antigua.

Graeme was also instructed to advise Mr Jospeh Lau, a Hong Kong national and billionaire businessman, in his constitutional challenge to the Hong Kong Extradition Bill. The Bill would have permitted extradition to take place from Hong Kong to mainland China. The case involved complex issues of constitutional and public international law regarding the status of Hong Kong and its legislative process under the “one country, two systems” politico-legal regime. The Hong Kong government discontinued the Bill following mounting political pressure and legal challenges.

Graeme represents Mr Lescene Edwards before the Privy Council in an appeal from Jamaica against his 2013 conviction for the murder of his partner. The case involves a constitutional challenge to the failure to try Mr Edwards within a reasonable time; the admissibility on appeal of fresh evidence on gunshot residue, blood spatter and ballistics; and challenges to the compromised nature of the handwriting expert evidence adduced against him at trial.

Graeme also represents Mr Eden Charles before the Privy Council in his appeal against the decision of the Prime Minister of Trinidad and Tobago to revoke his appointment as the deputy permanent representative to the United Nations. The case raises interesting issues regarding the use of prerogative powers under national and international law, as well as issues of discrimination and workers’ international rights protections.

Other international matters in which Graeme is instructed include:

Graeme is also a founder member of the Centre for the Enforcement of Human Rights International (CEHRI), which conducts public interest litigation in Austria and around the world. CEHRI’s work includes UN and OSJI funded projects focussed on securing justice for Syrian torture victims. As part of CEHRI, Graeme provides advice and assistance on a range of issues from historic child sex abuse claims to the representation of Kamran Ghaderi, a dual Austrian – Iranian national, whose detention in Iran the UN Working Group on Arbitrary Detention found to be in breach of rudimentary international legal protections (Decision).

Graeme accepts instructions across the spectrum of public law.

Graeme provides legal advice and representation to bereaved families at Inquests, which extends to civil claims against the police and health Trusts, and judicial reviews of coroners’ decisions.


On 4 April 2022, the Judicial Committee of the Privy Coun...Read more

Lord Alliance Award in Bioethics & Law, the University of Manchester