Coventry Family Wins Right to Irish Only Inscription on Gravestone

On Wednesday 24 February 2021, the Court of Arches allowed the Keane family’s appeal against a ruling of the Consistory Court of the Diocese of Coventry which had denied them a gravestone of their choice over their mother’s grave.

Margaret Keane died in 2018, aged 73. She was born in Ireland (in Athboy, Co. Meath) but moved to England in the 1950s and made a new life in Coventry. She met and married Irishman Bernard (Bernie) Keane, and they raised 6 children together. They lived in St Giles, Exhall, on the outskirts of Coventry. Margaret’s Irish heritage was very important to her throughout her life, and she and Bernie gave decades of voluntary service to the Gaelic Athletic Association (GAA) in Britain.

Margaret was buried in her local churchyard in St Giles, a short distance from the family home. The intention is, when he passes, for Bernie to be buried alongside her. The family has chosen a gravestone reflecting their heritage and culture, which includes a Celtic cross with the GAA symbol and the Irish phrase “in ár gcroíthe go deo,” which translates as ‘in our hearts forever.’ However, the  Consistory Court of the Diocese of Coventry ruled that they were not permitted to have an Irish phrase only, and it would only be allowed if accompanied by an English translation. The reasons given by the judge, Chancellor Stephen Eyre QC, included that the phrase would be “incomprehensible” to people in “English-speaking Coventry” and that, “given the passions and feelings” associated with the Irish language, there is a “sad risk” that people would consider it “some form of slogan or political statement.”

One of Margaret’s daughters, Caroline Newey, appealed on behalf of the family to the Court of Arches, the appeal court of the Archbishop of Canterbury. At the conclusion of the hearing, the three judges announced that they were allowing the appeal, with their reasons to follow.

Caoilfhionn Gallagher QC and Mary-Rachel McCabe acted for the Keane family, instructed by Caroline Brogan of Irwin Mitchell. Tim Moloney QC and Blinne Ní Ghrálaigh, instructed by Raj Chada of Hodge Jones and Allen acted for the intervener, Conradh na Gaeilge i Londain. The intervener filed detailed evidence with the Court of Arches concerning the history of the Irish language in the Church of England and the importance of the language to the Irish community in Britain.

The case has been widely covered in the Irish, British and international media. Some examples are: 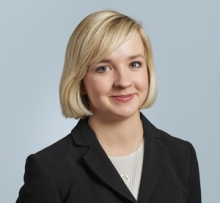 Coventry Family Wins Right to Irish Only Inscription on Gravestone