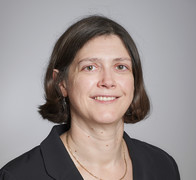 Alison is Director of Asylum Aid where she leads an expert team providing legal representation to asylum seekers and refugees. Asylum Aid is part of the Helen Bamber Foundation Group. Before joining Asylum Aid, Alison was the Legal Director of the Public Law Project, a national legal charity which promotes access to public law remedies for those whose are disadvantaged by poverty and other barriers. In June 2020, Alison was awarded the Outstanding Employed Barrister in an NGO award by the Employed Barristers Committee of the Bar Council.

Before moving to PLP in summer 2016, Alison had a public law practice at Doughty Street specialising in immigration, asylum and migrants’ rights in the wider contexts of unlawful detention, community care, asylum support, and access to justice.

Alison was junior counsel in two of the leading challenges to the legal aid cuts – R (Public Law Project) v Lord Chancellor [2014] EWHC 2365 (Admin) and [2015] EWCA Civ 1193 [2016] UKSC 39 (the successful challenge to the proposed ‘residence test’ for legal aid) and R (Gudanavicience & Others) v Director of Legal Aid Casework & Lord Chancellor [2014] EWCA Civ 1622 (which has established that Article 8, ECHR may require legal aid to be provided in immigration cases). In July 2015 she was awarded the Legal Aid Barrister of the Year award by the Legal Aid Practitioners’ Group in recognition of her work on these and other cases and in October 2015 was awarded Human Rights and Public Law Junior of the Year at the Chambers and Partners Bar Awards.

“‘A calm and collected advocate with a bright future.” (Legal 500 2017, Administrative and Public Law)

"An outstanding public lawyer, incredibly hard-working, writes really well and legally solid." "The quality of her work is outstanding. She is focused and committed, processes huge amounts of evidence like a computer and produces beautifully drafted and tight analysis." (Chambers UK 2016, Administrative and Public Law)

Alison acted as co-counsel (with Alasdair Mackenzie) for the appellant MP in the most recent Country Guidance case on Sri Lanka in the Upper Tribunal, GJ & Others [2013] UKUT 00319 (IAC), and on appeal to the Court of Appeal in MP and NT (Sri Lanka) [2014] EWCA Civ 829 (led by Raza Husain QC) and in the Supreme Court [2016] UKSC 32. GJ & Others led to a radical change in the Country Guidance on the safety of return to Sri Lanka and the Upper Tribunal heard five days of evidence. In June 2016, the Supreme Court made a reference to the CJEU in MP’s appeal on the question of whether he is entitled to humanitarian protection under the Qualification Directive as a result of the finding of the Upper Tribunal that his removal to Sri Lanka would breach Article 3, ECHR because of the impact on his mental health.

Significant current and recent cases include:

Alison is ranked in Chambers and Partners and the Legal 500 in Administrative and Public Law.

Alison is especially interested in issues arising out of unlawful detention under the Immigration Acts. She has advised on unlawful detention claims (both judicial review and civil claims for damages) and has successfully settled many damages claims against the Home Office for periods of detention ranging from a few days to more than two years. She acted with Paul Bowen for Medical Justice in its intervention in R (MD (Angola) & Others) v SSHD [2011] EWCA Civ 1238, which challenged the detention and treatment of immigration detainees who were HIV positive. She also represented the claimant in R (M) v SSHD [2012] EWHC 1424 (Admin), establishing that a Somali man who had been separated from his wife and children had been unlawfully detained for ten months, and the claimant in R (N) v SSHD [2014] EWHC 1593 (Admin), securing the release of a mentally ill man of disputed nationality who had been detained for two years following the end of a prison sentence.

Alison was junior counsel to Paul Bowen acting on behalf of the Interveners (Inquest, JUSTICE, Liberty and Mind) in Rabone v Pennine Care NHS Trust [2012] UKSC 2 [2012] 2 AC 72 (whether there is an operational obligation under Article 2 ECHR to take reasonable steps to protect psychiatric in-patients who are not detained from taking their own lives).

Since 2010 Alison has acted as junior counsel in a series of claims brought by Iraqi civilians against the Ministry of Defence for damages arising out of their arrest, detention, ill-treatment and in some cases the death of their relatives during the occupation of Iraq and while the British army remained in Iraq until 2009. During 2014-2015, the High Court considered a series of preliminary legal issues in relation to the outstanding claims, culminating in a series of Supreme Court judgments in two of which Alison was junior counsel: Mohammed (No 2) v Secretary of State for Defence [2017] UKSC 2 and Iraqi Civilian Litigation v MOD [2016] UKSC 25. Alison was junior counsel in the first trial of two lead claims in the Iraqi Civilian Litigation, which took place over June and July 2016 in the Queen’s Bench Division.

Alison is recommended in the Legal 500 in civil liberties and human rights.

Alison has particular experience of cases about the support available to asylum seekers and other migrants and is an active member of the Housing and Immigration Group. Notable cases in this area include:

Alison has also been instructed in cases raising issues of EU law particularly in the context of entitlement to social security benefits. She was junior counsel to Simon Cox in Patmalniece v SSWP[2011] UKSC 11; [2011] 1 WLR 783 (whether the restriction of State Pension Credit to those with a right to reside in the UK was unlawfully discriminatory on grounds of nationality against other EU citizens who were habitually resident in the UK) and R (Tilianu) v SSWP [2010] EWCA Civ 1397(whether a worker who, after a period of self-employment followed by a period of illness during which he was hospitalised, was involuntarily unemployed retained a right of residence).

Alison acts in Parole Board cases and advises on legal issues arising from imprisonment including claims for disability and race discrimination, and challenges to categorisation and allocation decisions. She has provided training on adjudication appeals and challenges at the Association of Prison Lawyers’ conference and on foreign national prisoners and discrimination for the Prisoners Advice Service. She has a particular interest in the rights of foreign national prisoners and the application of policies on temporary release and allocation to open conditions to prisoners facing deportation.

In R (Baybasin) v MOJ (November 2010), Alison was instructed as junior to Paul Bowen. The MOJ settled this claim for unlawful disability discrimination by a paraplegic wheelchair user who had been held in appalling conditions in HMP Belmarsh since February 2004 the week before a five-day hearing in the High Court. The MOJ accepted that it had unlawfully discriminated against Mr Baybasin by failing to provide him the means to use the toilet and bathe independently, apologised to him, and paid him compensation for the injury to his feelings.

Alison has a keen interest in equality and discrimination issues. In 1998 – 1999, she spent a year as a research intern at the European Roma Rights Center (ERRC) in Budapest researching discrimination against Roma in employment among other issues. She has been instructed to advise on potential discrimination claims arising in the prison, mental health, immigration detention, education and public authority fields. These have included the claim in Baybasin, noted above.

Alison has been appointed by the Equality and Human Rights Commission to its panel of preferred counsel.

Alison regularly delivers training on the areas of law in which she specialises to lawyers, NGOs and others. She is happy to consider providing bespoke in-house training packages and webinars.


The High Court has found that part of the Regulations gov...Read more

Alison is a member of the following professional associations: