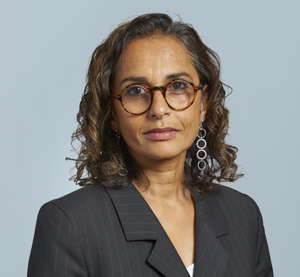 In practice at Doughty Street Chambers since 1991, Aswini has a reputation for “cutting through to the heart of complex cases” and turning around “large volumes of work in short periods of time” (Chambers and Partners 2016).

Aswini is an acknowledged expert in human rights, mental health and capacity law, focusing, in particular, on the protection of vulnerable adults, children and young people in many different spheres of life. She utilises her expertise in a wide range of practice areas and cases, in contentious and non-contentious matters. For example, health and welfare cases in the Court of Protection, and concerning public and private law issues, actions against state and private bodies such as sporting bodies, including assault and unlawful detention claims, historic child abuse claims, inquests and inquiries, reporting restrictions and international law.  She also drafts interventions for NGO’s in cases before the higher courts and advises on proposed legislation, most recently on the issue of female genital mutilation.

In addition, she has a strong background in investigatory, and regulatory work and is a qualified mediator.  Aswini sits as a deputy chair of the Investigating Committee of the General Pharmaceutical Council.  She has chaired and produced published reports for six independent inquiries into homicides by patients within mental health services.  She has recently represented the Child Migrants Trust in the investigation into overseas child migration by the Independent Inquiry into Child Sexual Abuse, chaired by Professor Alexis Jay.

Aswini is currently coordinating a strategic litigation project with Validity, formerly the Mental Disability Advocacy Centre. The project aims to challenge the removal of legal capacity from vulnerable adults in various European jurisdictions, by the application of international human rights, including the UN Convention on the Rights of Disabled Persons. Through her child abuse work she has a strong interest in the protection of children from exploitation and harm, in particular, de-institutionalisation and the development of alternative care models in South Asia.

She is able to accept instructions under the Direct Access scheme.

“Safeguards for informal patients”: Journal of Mental Health Law, 20 (2010) 71.  Special issue on “A model law fusing incapacity and mental health legislation – is it viable; is it advisable?”

Chapter on mental health in Crime and Human Rights.   Published by OUP in December 2009

Contributed to: "International Criminal Court's Trust Fund for Victims. Analysis and options for the development of further criteria for the operation of the trust fund for victims." A discussion document. Published by Redress, Dec. 2003.

Mental health and Court of Protection

Aswini has a substantial mental health and Court of Protection practice, acting for all parties and regularly instructed by the Official Solicitor, including in appeals, and in a variety of fora.  She has a longstanding and acknowledged expertise in mental health and mental capacity law.  She is the consultant editor on mental health for Halsbury’s Laws and lead author of Butterworth’s New Law Guide to the Mental Capacity Act 2005.  Her cases are all complex cases of their kind, giving rise to a myriad of issues: the jurisdictional overlap between the Court of Protection and the Administrative Court, removal of P from family and issues of deprivation of liberty (article 5 ECHR) or interference with private and family life (article 8 ECHR), the Hague Convention on the International Protection of Adults, the provision of treatment under the MHA or MCA and advance decisions, the use of the inherent jurisdiction of the High Court, conditions of detention and degrading treatment under article 3 ECHR, and access to justice under article 6 ECHR/the common law.

Aswini has been engaged as chair in six independent inquiries commissioned by various health authorities into homicides committed by patients within specialist mental health services and authored six published reports into the same. She drafted an intervention on behalf of the REDRESS Trust in an application for an independent public inquiry into the torture of Iraqi detainees imprisoned in Iraq by the British military.

She was instructed on behalf of the Child Migrants Trust in the Independent Inquiry into Child Sexual Abuse (formerly the Goddard Inquiry, and now chaired by Professor Alexis Jay). These hearings have just been completed and were the first substantive hearings held by this body.  She also acts in inquests into the deaths of vulnerable people in prison, hospital and social care settings.

Cases and inquiries include:

Chair of following homicide inquiries under Department of Health guidance (HSG(94)27) and author of associated reports:

Aswini advises and acts in cases raising issues such as the right to life, torture and inhuman and degrading treatment, deprivation of liberty, private and family life, access to justice, removal of legal capacity.

Aswini is currently coordinating a major strategic litigation project with the Mental Disability Advocacy Centre. The project aims to challenge the removal of legal capacity from vulnerable adults in various European jurisdictions, by the application of international human rights, including the UN Convention on the Rights of Disabled Persons.

She contributed to:"International Criminal Court's Trust Fund for Victims. Analysis and options for the development of further criteria for the operation of the trust fund for victims."   Published by Redress, Dec. 2003.

Actions for damages, including under the Human Rights Act 1998

Aswini has particular expertise in tort actions and Human Rights Act claims, for example, relating to assaults or unlawful detention against public authorities including social services, the police and immigration authorities, negligence by mental health professionals, and for misuse of private information and against sporting organisations.   She has acted in a series of group actions for victims of historic child abuse in children’s home.  She has also acted for individuals in such claims, including cases about the failure of local authorities to remove young children from abusive families, and other care situations, and cases taken against sporting bodies.  She has particular expertise in issues of limitation and vicarious liability.

Aswini has been involved in a number of cases concerning publicity and reporting restrictions engaging rights under article 6, 8 and 10, and the Human Rights Act 1998. She has also advised on television productions, for example, Unwell, a Dispatches documentary for Channel 4 using covert filming in psychiatric hospitals.


This morning the Supreme Court has handed down a landmark...Read more


Our Mental Health and Court of Protection team have been ...Read more

Diploma in Law, City University in 1985

Recommended in Chambers and Partners (Court of Protection and Civil Liberties) and the Legal 500.

“She is well respected for her ability to engage with difficult courtroom topics in a calm and persuasive manner…..As astute as they come in Court of Protection matters. Her ability to cut through to the heart of complex and difficult cases is remarkable, as is her ability to turn around large volumes of work in very short periods of time. The safest of safe hands."

In 2015:   "She is a thoughtful, dynamic lawyer and a formidable advocate. Her attention to the detail of a case is second to none."

“An expert in mental health law.”

Judge of the First Tier Tribunal (Health, Education and Social Care Chamber) since 2002

Deputy chair of the Investigating Committee of the General Pharmaceutical Council since September 2014.