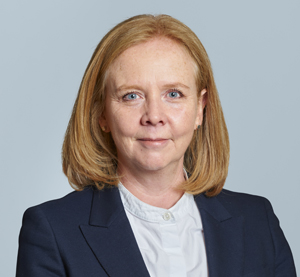 Fiona Murphy is Joint Deputy Head of Chambers and is ranked in Band 1 by Chambers & Partners 2020 in Police Law and Band 2 in Inquest and Inquiries work.

"The person to go to for sound tactical advice.  A determined and fearless advocate.” Chambers & Partners 2020

"Phenomenal: a force of nature. Her output is second to nobody I've ever worked with and her understanding and commitment to the work is really high." Chambers & Partners 2020

"She is somebody who you have total confidence in because of her tactical awareness and her 'grit your teeth and get things done' attitude." Chambers & Partners 2020

Fiona Murphy is Joint Deputy Head of Chambers and co-chair of our management board.

Fiona specialises in regulatory work including civil claims against public authorities, judicial review and inquest and inquiry work.  She has expertise in both private and public law and represents individuals who seek redress for violations of their human rights.

Many of Fiona’s cases are high-profile: she is currently instructed in the ongoing inquests and public inquiries into the controversial deaths following police restraint of Dalian Atkinson, Darren Cumberbatch and Shane Bryant and the police shootings of Jermaine Baker and Anthony Grainger. She represented 70 individuals in relation to phase 1 of the Grenfell Tower Inquiry and is currently representing several women deceived into entering abusive sexual relationships by undercover police officers in relation to their civil claim and before the Undercover Policing Inquiry.  She acted for 77 of the families bereaved by the Hillsborough Disaster at the new inquests and is a member of the claimant counsel team in the ongoing group litigation for misfeasance in public office against South Yorkshire Police.

Fiona has a particular interest in remedies to address violence against women and is currently instructed in a number of cases concerning failures by the police to protect victims.

Fiona was one of the founders of leading police law specialist solicitors’ practice, Bhatt Murphy and gained 20 years’ experience as a solicitor conducting complex litigation before transferring to the bar in 2013.

Outside the courts, Fiona has contributed to various inquiries and reviews including the 1997 Butler Inquiry (concerning the handling of deaths in custody by the CPS), the 1997 European Committee on the Prevention of Torture’s investigation into the United Kingdom’s compliance and the United Nations.

Fiona co-presents the annual advanced Actions Against the Police and advanced Inquests Law courses run by the Legal Action Group.

Fiona has specialised in claimant police law since 1992. Her practice includes private and public law, inquests and inquiries. She has been involved in a number of the test cases in this area and has extensive experience of achieving successful trial outcomes and substantial out-of-court settlements.  She has extensive knowledge and experience in broader regulatory law contexts including in relation to the medical and nursing professions, prison, probation and immigration services, social services and the building professions.

Her notable cases include successful challenges to the outcome of independent investigations by the IPCC (Green and Rahman) and in respect of failures by the DPP to prosecute police officers (O'Brien and Ahmad), the Court of Appeal guideline case on assessment of damages in police cases (Thompson), securing unlawful killing conclusions at inquests concerning excessive use of state force and police misconduct (Jimmy Mubenga, Hillsborough Inquests and Richard O’Brien) and has secured several six figure compensation awards.

Fiona is an experienced negotiator and has a keen interest in alternative dispute resolution.

The representation of families at controversial inquests involving allegations of excessive force, malpractice and neglect is a mainstay of Fiona’s practice.

Fiona is currently instructed in several private and Human Rights Act claims on behalf of bereaved families and has extensive experience of resolving such claims.

As a solicitor Fiona gained extensive experience in representing the families of those who have died in custody including Richard O’Brien (unlawful killing), Simon Allen (state neglect) and Kevin Jacobs (state neglect).

In 2006, Fiona was commissioned by the Hon Mr Justice Blake to prepare an opinion for his review of the controversial deaths at Deepcut Barracks.

Fiona has a specialist public law practice focusing upon decisions reached by the police and those responsible for police oversight together with public law issues arising from her involvement in inquests and inquiries.

Fiona’s work on behalf of bereaved families has also led to her involvement in a number of public law cases as a solicitor including R (Hurst) v HM Coroner for North London [2007] 2 AC 189 (which concerned the coronial jurisdiction to investigate Article 2 systemic failings following the conclusion of a related homicide prosecution and the temporal reach of the Human Rights Act) and R (Keith Lewis) v HM Coroner for Mid and North Division of the County of Shropshire [2010] 1 WLR 1836 (which concerned the means by which jury verdicts should be elicited post-Middleton).

Similarly, her work on behalf of victims of police misconduct led to her involvement in successful challenges to chief officers, the DPP and IPCC including in relation to a decision to permit a senior police officer to retire and thus escape the reach of misconduct proceedings (R (Coghlan) v The Chief Constable of Greater Manchester Police [2005] ACD 34) and to a decision by the DPP not to prosecute police officers (R v DPP ex parte O’Brien, RCJ 1997).


On 9 October 2020 the Court of Appeal gave important clar...Read more


The Metropolitan Police has apologised and paid an undisc...Read more