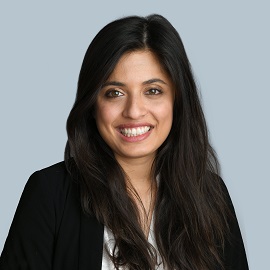 Tayyiba combines a criminal practice with work in related areas including inquests, crime-related public law, prison law and actions against the police. She also has a busy international practice and has been instructed in proceedings before the ICC, IACHR and WGAD.

Tayyiba has a busy criminal practice representing clients accused of a wide range of criminal offences and appears regularly in the youth, magistrates’ and Crown Court. She has also advised on appeals against conviction and sentence and has a particular expertise in challenging the convictions of victims of trafficking in the youth and adult courts.

In addition to her criminal practice, Tayyiba has also been instructed in a number of inquests to represent the families of the deceased. She was recently instructed as a led junior representing a family of a single mother who took a fatal overdose having encountered systemic issues in the resolution of her benefits claim by the Department of Work and Pensions.

Tayyiba has also been actively involved in the sphere of public law and been instructed on a number of urgent judicial review claims. She has appeared unled in the High Court and has a particular expertise in crime-related public law.

Alongside her domestic law practice, Tayyiba has a developing international law practice. Having worked at a number of international human rights NGOs, Tayyiba is instructed in relation to an application on behalf of victims in relation to the ICC’s investigation into war crimes in Palestine. Tayyiba was also instructed by Reprieve to act for two Yemeni families, in a challenge to the legality of US targeted killing operations before the Inter-American Commission of Human Rights.

Prior to commencing her career at the Bar, Tayyiba qualified as a solicitor at Freshfields Bruckhaus Deringer before moving to work for the human rights NGOs Reprieve and Equal Rights Trust.

Tayyiba is an experienced trial advocate. She regularly appears in the Crown Court, Magistrates Court and Youth Court. She has been commended for her careful and sensitive approach to young and vulnerable defendants.

She regularly advises individuals on appeal against conviction and sentence. She has a particular expertise in advising victims of trafficking on appealing their convictions.

Examples of recent instructions include:

R v SA – Wood Green Crown Court - currently instructed to represent a defendant indicted on two counts of s.18 GBH and a single count of robbery in relation to a stabbing involving multiple victims. The defendant has been charged on a joint enterprise basis.

R v C – Westminster Magistrates’ Court instructed to represent a defendant charged with wilfully refusing to provide their PIN and password seized pursuant to a search under Schedule 7 Terrorism Act. The defendant challenged the legality of the stop on the basis that it was discriminatory; the ruling in this case is currently the subject of a case-stated application in which Tayyiba is junior counsel.

R v FT – instructed to advise on an application to the CCRC following the conviction of a vulnerable victim of trafficking.

Tayyiba represents bereaved families in coronial proceedings and has been instructed in high profile cases.

She was recently instructed as a led junior representing a family of a single mother who took a fatal overdose having encountered systemic issues in the resolution of her benefits claim by the Department of Work and Pensions.

As a result of her experience dealing with highly vulnerable clients, Tayyiba is particularly well suited to inquests involving particularly vulnerable individuals, and inquests following deaths in prisons and deaths at the hands of police and security guards. Tayyiba also advises on civil claims following inquests and on judicial review of coronial decisions.

Recent examples of instructions include:

Tayyiba has a broad public law practice with a particular interest in crime-related public law. She is currently instructed as junior counsel in a case stated before the High Court raising novel questions about discrimination and the use of powers under Schedule 7.

Tayyiba has also been actively involved in the sphere of public law and been instructed on a number of urgent judicial review claims.

Tayyiba represents prisoners before the Parole Board. She has a particular interest in representing prisoners convicted of terrorism related offences. She is also able to advise more broadly on prison law and on potential prison judicial review claims.

Tayyiba recently represented an individual convicted of membership of a far-right terrorist organisation at their Parole Board hearing. Following that hearing the individual’s release on licence was approved.

Actions against the police

Tayyiba regularly advises on civil claims against the police. She has advised in claims concerning police assault, false imprisonment, and malicious prosecution.

Tayyiba has a busy international practice and is currently instructed in the following matters:


Nazanin Zaghari-Ratcliffe has been freed by Iran after 6 ...Read more


A diplomatic envoy of the Kurdistan National Congress (KN...Read more

The Honourable Society of the Inner Temple

Tayyiba co-authored a case analysis of the recent bedroom tax decisions (JD and A v United Kingdom and RR v Secretary of State for Work and Pensions) in the European Human Rights Law Review.

She also authors headnotes for the European Human Rights Reports.