Doughty Street Chambers is thrilled and proud to announce that our leading juniors, Sarah Vine, Liam Walker, Laura Dubinsky, Richard Thomas and Jude Bunting have been appointed Queen’s Counsel as a result of the 2021 competition.

Sarah specialises in criminal law and appeals, defending against a wide range of difficult and emotive cases of serious violence (in particular murder and other homicide offences) and sexual offending. She is also instructed in complex and serious allegations of financial crime, and is sought out for advice and representation in matters involving investigatory powers, confiscation and restraint orders.

Liam is a crime specialist whose practice extends across regulatory and professional disciplinary law (including sports, medical and media), business crime, inquests and inquiries. He is one of only two junior counsel listed as being ranked in the top tier of counsel in both the Legal 500 and Chambers and Partners 2022.  Liam is regularly instructed to defend individuals charged with the most serious offences: murder, attempted murder, terrorism, serious sexual offences and complex fraud. He is the author of Westlaw Insight’s guide to manslaughter and, as an expert in sexual offences, is a speaker for Lexis Nexis on serious sexual offences. As a result of Liam’s commitment to his clients, Liam is regularly instructed to represent individuals with a high media profile.

Laura practices in public law at all levels, with a particular focus on cases with a refugee, immigration, ECHR or EU law dimension.  She is regularly instructed in test challenges to government policy and to systemic failures arising out of public authority practices.  A substantial part of her work also focuses on civil liberties. She has, for example, for example, acted in test litigation concerning the scope of bail powers; challenges to the unlawful imposition of COVID curfews; and many of the landmark cases concerning unlawful administrative detention.

Jude specialises in judicial review, human rights and media law. He is an expert in arguing novel and high-profile points of law and has acted in 17 cases before the Supreme Court. His practice includes cases involving open justice, surveillance, national security, prisons, police, international law, and women’s rights. In 2020, Jude was named "Public Law Junior of the Year" at the Legal 500 Bar Awards, “Human Rights and Public Law Junior of the Year” at the Chambers and Partners Bar Awards, and "Lawyer of the Week” in The Times.

“Fantastic news about our 5 new silks, coming on top of our 2 brilliant new high court judges! Congratulations to all our new silks, I know we are all proud to have such brilliant and dedicated colleagues and can only begin for the moment to identify their marvellous qualities.

Let us congratulate Sarah Vine, who is the most surefooted, sensitive and highly effective trial and appellant lawyer. I know just how much she has been working at full tilt throughout the land despite COVID in difficult and sensitive cases and how richly she deserves the accolade of silk.

Liam Walker, known as the barrister who fights. He is a prolific communicator and has served as counsel to many famous people - including Julian Assange, leading actors and many sporting idols. He is a man of many parts, an athlete and a philanthropist as well as a fearless advocate.

Laura Dubinsky, our brilliant and fearless champion of asylum seekers and of wrongly detained foreign nationals. She is rightly regarded as the star of public law and immigration fields and has constantly and selflessly devoted herself to good causes throughout her many years of practice.

Richard Thomas is widely known for his championship for those on death row and those wrongly convicted. He is an imaginative and creative counsel who fought for the rights of those prosecuted for seeking asylum and is constantly calling to represent those accused of terrorist offences, murder and the like at the Old Bailey.

Jude Bunting, an irrepressible and ambitious champion or prisoners’ rights and of the abuse of public law powers, here, in Northern Ireland and around the world, a great fighter too for media freedoms and a Voltaire of his time.”

The appointments to Queen’s Counsel of Sarah, Liam, Laura, Richard and Jude, brings chambers’ complement to a total of 37 Silks with leading reputations both domestically and internationally, across the range of criminal, public and administrative law.

For more information about the work of Sarah, Liam and Richard, please contact Matthew Butchard. 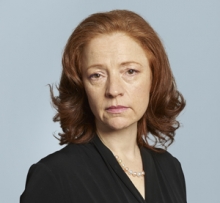