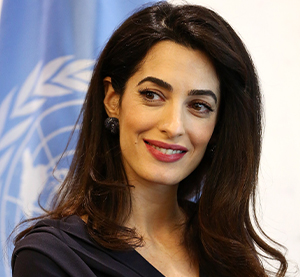 Amal frequently represents victims of mass atrocities, including genocide and sexual violence. She has acted in many landmark human rights cases in recent years including the world’s first trial in which an ISIS member was convicted of committing genocide against Yazidis. Amal also represents Yazidi victims in the first case alleging complicity in crimes against humanity by a company that funded the terror group.

She has represented Armenia in a case involving the Armenian genocide and was recently counsel to 126 victims of the genocide in Darfur, Sudan, at the International Criminal Court. In 2021 she was appointed Special Adviser to the Prosecutor of the International Criminal Court on Darfur. She also currently leads a legal task force on Accountability for Crimes Committed in Ukraine, established at the request of the government of Ukraine to advise on delivering justice for victims of crimes committed by Russia in Ukraine. She is also a member of the Working Group on Compensation for Damage Cause to Ukraine, a group of international legal experts appointed by President Zelensky to advise on legal mechanisms for survivors of the conflict to claim compensation.

Amal accepts instructions under the Bar Council Standard Contractual Terms. For enquiries regarding potential legal representation, please email Callum Stebbing at c.stebbing@doughtystreet.co.uk and for other enquiries, please email assistant@amalclooney.co.uk. Please note that due to the volume of emails, you may not receive an individual response.